…There is no love without suffering, suffering without pain,
And a pain so acute as the one caused by love... 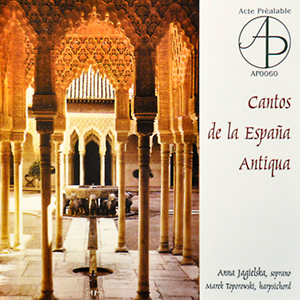 These words from a 16th century Spanish song Ay linda amiga can be a motto for the whole CD containing folk Spanish songs, compositions from the Medieval collection by Martin Codax Cantigas de Amigo, Renassaince compositions as well as songs of Sephardic Jews expelled from Spain in 1492, whose culture and dialect called ladino have survived till today. The songs come from different centuries, some were written down, some were passed in the oral way, but almost all glorify love: waiting, missing and despair interlace with love which is passionate, ardent and sometimes sensual and playful… The songs tell us about human worries and moments of happiness and about the matters which are close to all of us all the time. This is the reason to combine so different expressions of Spanish spirit on one CD, because this motto could be found in a Renassaince composition as well as in a folk song or a Sephardic song.

Finding a common feature of court and folk music was not an easy task, but following these two routes, looking for “common places” was a unique adventure. The idea of combining these two worlds is expressed by the singer who releases emotions using spontaneous, improvised adorments close both to the technique of playing folk instruments as well as ancient performance practices.

We started to arrange this program with Renaissance music but soon it turned out that the harpsichord sounds surprisingly beautiful with Sephardic music, although probably these songs have never been performed this way before. The harpsichord is a fairly young instrument but in this music it reveals its whole history: we can hear the sound of a Medieval psaltery, a harp, a lute and maybe a guitar, too. Thousands of ways of unbraiding garlands of arpeggio accords make it possible to illustrate each word, each emotion enclosed in the lyric…

The CD was recorded in 2000, at the church Nawiedzenia NMP, 2 Przyrynek street in Warsaw. It was issued by the publishing house Wydawnictwo Acte Prealable 2000.

Booklet in for languages: Polish, English, French and Spanish.

This website uses cookies to improve your experience while you navigate through the website. Out of these, the cookies that are categorized as necessary are stored on your browser as they are essential for the working of basic functionalities of the website. We also use third-party cookies that help us analyze and understand how you use this website. These cookies will be stored in your browser only with your consent. You also have the option to opt-out of these cookies. But opting out of some of these cookies may affect your browsing experience.
Necesarias Siempre activado