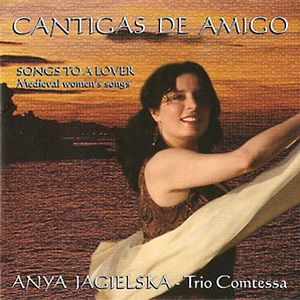 The CD CANTIGAS DE AMIGO – “Songs to a Lover – Medieval women’s songs” is a story about love narrated in the language of Medieval Spanish and French songs – a musical story about emotions in women’s heart.

The CD begins with the oldest Spanish series of love songs „Cantigas de Amigo” – „Songs to a Lover” composed by the Spanish musician and poet Martin Codax. It consists of seven songs which tell a story about the feelings of a young girl from a small village Vigo who is waiting in vain for her lover’s return.

Then the story moves to Medieval France, where we are accompanied by songs of Troubadours and Trouvers – some of them full of grief and sorrow, others witty or even frivolous. The CD ends with the song of the famous Troubadess Comtessa de Dia: „A chantar”, which is a lamentation caused by her lover’s unfaithfulness…

A woman who is missing her lover, suffering, complaining but she is also playing, flirting and hurting him is a colourful portrait painted with a poetic tone of Medieval lyric. On the CD we will hear various musical and literary genres – the arrangements of all the pieces are made by the consort.

The CD was issued by the publishing house RIVEIRO Music 2008. It was recorded in 2001, at the church Nawiedzenia NMP, 2 Przyrynek street.

This website uses cookies to improve your experience while you navigate through the website. Out of these, the cookies that are categorized as necessary are stored on your browser as they are essential for the working of basic functionalities of the website. We also use third-party cookies that help us analyze and understand how you use this website. These cookies will be stored in your browser only with your consent. You also have the option to opt-out of these cookies. But opting out of some of these cookies may affect your browsing experience.
Necessary Always Enabled